Philadelphia’s Court of Common Pleas (Pennsylvania’s First Judicial District) issues annual reports on all aspects of the Court’s operations. This includes, among other things, a general overview of the Commerce Court’s activities and its case statistics. 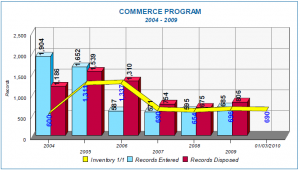 For example, the most recently issued Report (2017) states (page 34) that the Commerce Court: “continued to provide an efficient process for the adjudication of complex commercial litigation; to assure judicial expertise in the handling and deciding said litigation; and to develop a body of case law on commercial issues resulting in greater predictability for business transactions.”

The report includes a chart showing Commerce Court filings, inventory of pending cases, and dispositions for the years 2010-2017, and a second chart breaking out the cases in some more detail, distinguishing the traditional commercial cases and sequestration matters, from 2014-2017. Both charts can be found at page 33 of the 2017 report.

[Note: Since the fall of 2013, the Commerce Court handles sequestration petitions, typically brought by the City of Philadelphia or Philadelphia School District. The petitions aim at seizing income against tax liens on delinquent properties. The Commerce Court hears these petitions in addition to the business and commercial matters defined in its enabling jurisdictional order.]

Here are some other annual reports from earlier years that include Commerce Court statistical information and general developments:

A list of other available Annual Reports can be found here